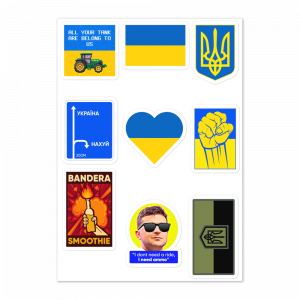 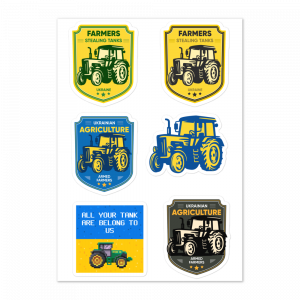 6 stickers. Scroll down to description section for more information.

Ghost of Kyiv
The Ghost of Kyiv is the nickname given to a disputed MiG-29 Fulcrum flying ace credited with shooting down six Russian planes in the Kyiv offensive on 24 February 2022. It is estimated that The Ghost of Kyiv has shot down a total of 30 enemy planes between the start of the war and the 3rd of March. Although some sources consider the Ghost of Kyiv to be an urban legend or war propaganda, its status has nevertheless been credited as a major morale boost for the Ukrainian population to bolster optimism in spite of the Russian invasion.

Snake Island
During the first day of the Russian invasion of Ukraine, a Russian warship entered Ukrainian waters next to the Snake Island and suggested the locally deployed troops to surrender over radio. “Russian warship, go fuck yourself!” was the last communication and the only response made by Roman Gribov. You can listed the communication between the two parties here.

Pickle Warfare
It is believed that in Kyiv a woman managed to knock down a Russian reconnaissance drone from a balcony with a jar of pickles (or cucumbers). “How did they expect to occupy this country?” – was a tweet by Liubov Tsybulska, the Founder of The Centre for Strategic Communications and Information Security under the Ministry of Culture and Information Policy of Ukraine. Here is the link to the original tweet.

The story received a follow up, people managed to find the woman mentioned in the original story, and she said that: “it was a jar of tomatoes!“.

Bandera Smoothie
This is how Ukrainian locals call their version of the Molotov cocktail. It is believed to have a special ingredient.

Witches of Konotop
A video has surfaced where a local woman confronts an enemy soldier sitting atop a tank: “Don’t you know that every second woman in Konotop is a witch? Tomorrow you won’t be able to get your d**k to stand up!”

Ukrainian Farmers
While the Ukrainian army had been fighting the Russian invasion, local farmers decided to contribute their fair share as well. One of the residents of Kakhovka, a city located in the vicinity of the occupied Crimea, has towed a Russian tank with his tractor. Soon after, the State Tax Service Of Ukraine has commented that there will be no need to submit captured enemy’s machinery in the tax declaration.

These glossy stickers are designed just for you. Give your favorite items, like a notepad, laptop, or phone case an extra glow and personal touch.

Don’t forget to clean the surface before applying the stickers.

This website uses cookies to improve your experience while you navigate through the website. Out of these, the cookies that are categorized as necessary are stored on your browser as they are essential for the working of basic functionalities of the website. We also use third-party cookies that help us analyze and understand how you use this website. These cookies will be stored in your browser only with your consent. You also have the option to opt-out of these cookies. But opting out of some of these cookies may affect your browsing experience.
Necessary Always Enabled
Necessary cookies are absolutely essential for the website to function properly. These cookies ensure basic functionalities and security features of the website, anonymously.
Functional
Functional cookies help to perform certain functionalities like sharing the content of the website on social media platforms, collect feedbacks, and other third-party features.
Performance
Performance cookies are used to understand and analyze the key performance indexes of the website which helps in delivering a better user experience for the visitors.
Analytics
Analytical cookies are used to understand how visitors interact with the website. These cookies help provide information on metrics the number of visitors, bounce rate, traffic source, etc.
Advertisement
Advertisement cookies are used to provide visitors with relevant ads and marketing campaigns. These cookies track visitors across websites and collect information to provide customized ads.
Others
Other uncategorized cookies are those that are being analyzed and have not been classified into a category as yet.
SAVE & ACCEPT
Back to Top